Immigrant moves from Bosnia-Croatia border, stands out on own here

Dragan Zeljkovic stands next to his limo, one of three vehicles in his taxi company fleet, at his home in Wilmington. Zeljkovic moved to Wilmington in 2003 from the border of Bosnia and Croatia. 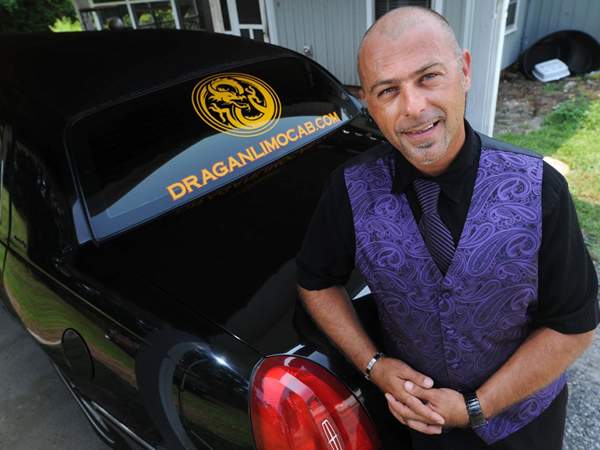 In 2003, Dragan Zeljkovic, the owner of Dragan Limo in Wilmington, came to the United States with two suitcases of clothes and the assistance of Winter Park Baptist Church. His is a story about perseverance, about humility and hard work. It’s also a story of how small the world can be.

On a recent Sunday afternoon, Zeljkovic, whose first name is pronounced “dragon,” had been awake a few hours but looked tired. He wore a ring on his finger bearing the Serbian crest, four identical symbols that mean “only unity can save us.” His eyes were sleepy and a cell phone rang frequently. With each call – “Dragan Limo and Taxi,” he’d say – his energy level picked up.

Zeljkovic’s story is familiar – an immigrant coming to the U.S., working hard to embody the American success story. With a deep voice, like a Croatian Christopher Walken, he speaks with a dialect that rolls and chops, the product of learning Oxford English in college and blending it with American English. When Zelj¬kovic came to the United States, he was confused at what he heard.

“I’m thinking, what kind of English is this?” he said. To improve he used the Internet and watched DVDs with subtitles in English. Today he speaks well, integrating American slang with the occasional word in the wrong tense.

“I’m at the point where people understand me and I understand them,” he said. “It’s not perfect yet, but it’s coming, you know, one day.”

In his hometown of Gradiska, Croatia, Zeljkovic owned a pet store by the time he was 18 and later on, a bar. Raised by a single mother, he worked after school. His first job was at age 9 working on apple farms. After the dictator Josip Broz Tito, the president of Yugoslavia, died in 1980, ethnic tensions grew within the former country’s six republics – Bosnia, Serbia, Macedonia, Montenegro, Slovenia and Croatia. Things splintered as each republic sought its own nationalism. From 1990 to 1995 there was a civilian war and Gradiska was right in the middle of it, half of the town in Croatia, half in Bosnia. Zeljkovic describes that period as three sides fighting – those against one another and those stuck in the middle.

“The war split people apart all over the place,” he said. “I miss my river. I miss going to fish there. I didn’t want to go on one side. You can’t win that war. Everybody lose something.”

Zeljkovic joined the United Nations Peacekeepers and attended a police academy, a program that normally takes four years. He and fellow students finished in six months by taking classes for 15 hours a day. He joined to help the U.N. create a neutral zone, something that many people took the wrong way.

“When you go in the middle everybody want to shoot you,” he said. “Simple example, you’re arguing in your house and someone come from the side and try to make you stop and do certain things. You say, ‘Who are you? Get out of my house.’ ”

Innocent people were caught in the middle. Zeljkovic helped save many, some friends and others he didn’t know. Convoys and humanitarian buses drove people from Bosnia to Zagreb, Croatia, then outside to Sweden and Germany. He worked as a border officer checking vehicles and saw people who had lost everything, their families killed from bombings.

“We are in the front line working to make the neutral zone,” he said. “Then you go back home and work on the border between Croatia and Bosnia. Some people don’t have proper paperwork and just want to run away from that area. I let them go.”

When the war stopped in 1995, Zeljkovic left for Belgrade, the capital of the former Yugoslavia, today Serbia. He struggled, working a variety of jobs, much like he has in Wilmington. Trying to leave for the U.S. or Australia, where his mother moved to, was difficult. He applied for numerous visas and worked with a number of immigration programs, including the International Organization for Migration, or IOM, which has an office in Belgrade. Established in 1951, the IOM believes humane and orderly migration benefits both the migrant and society. An application asked Zeljkovic to select three places and the IOM would look for a sponsor there.

He waited for two years with no luck. By chance, at a restaurant he met a family from New Bern on vacation in Belgrade. They learned Zeljkovic was waiting for a sponsor and mentioned a friend who was the manager in a refugee office in New Bern. The family took Zeljkovic’s case number and contacted their friend once back home, who then contacted the IOM office in New York. Soon after, Zeljkovic received a letter that said he had a sponsor and asked if he would like to go to New Bern or Wilmington.

“I’m like, ‘What’s a Wilmington? What’s a New Bern?’ I see Wilmington (is near) the ocean, a river on the other side,” Zeljkovic said, noting the geographic similarities to his hometown. “I fall in love with this place when I see (it) on the website.”

After multiple interviews and medical checkups, Zeljkovic made it to the U.S. His sponsor was Winter Park Baptist Church, and the parishioners helped him adapt to the area.

“Those people, like everyone in Wilmington, have that Southern charm,” he said. “I am very grateful to them. They help me find a job.”

Through the immigration program Zeljkovic received a temporary passport and a Social Security number. After two years he received a green card, and he is now eligible to apply for U.S. citizenship, although he said he’s not interested in voting.

“I don’t like politics because of what I survived,” he said. “I didn’t take advantage of (immigration). Some immigrants here don’t know English. I say if you live in this country you need to respect it and know English. You have some living in the States 20 years and don’t know English. Kids translate for them. I understand that culture-wise, religious-wise, but I don’t think that’s respectful towards this country. I come here to live my life. I am big part of it too. Somebody attack America, I will go fight for it.”

Zeljkovic is working toward citizenship but has to wait on Washington, D.C., which takes a while. He said he will wait his turn for the paperwork.

“You have a test and after that, swearing in,” he said. “I am waiting for them to call me. I’m looking forward to that. I feel Wilmington is home. I catch myself coming from Myrtle Beach, I hit Cape Fear Memorial Bridge and I’m like, home sweet home.”

Zeljkovic first worked in Wilmington for George Lancaster, who owns rental properties that need maintenance. He then worked for three years at Solid Concepts learning to build and install counter tops. He also worked part time at Chuck E. Cheese making pizzas and repairing games, at Mayfaire Cinemas and building custom aquariums. In 2006 he met Sean Anderson, who drove for Dolphin Taxi and suggested Zeljkovic try it.

“My initial impression was that he was really intelligent and definitely a survivor,” Anderson said. “No BS, just looking for his way to make it.”

Zeljkovic was originally hesitant to pick up strangers, but he gave it a try and discovered he liked meeting people. He drove for Dolphin two years, then Lett’s Taxi. His independent nature took over and he asked to work from a single taxi instead of switching vehicles each shift. For a year he worked out of one cab and built a clientele.

“He has always taken time to make sure his vehicles and business reflect his personality,” Anderson said. “His sense of style and personality comes though in everything he does.”

Zeljkovic started his own taxi and limo service in 2009, purchasing an existing business to obtain the permits, perhaps at the worst time. But during a bad economy he stays busy and employs two people.

“My guys,” as he calls his employees, and his clientele are noticeably important to him. He maintains a steady list of clients who pre-schedule pickups on the weekends.

“If you don’t pre-schedule a ride, you’re going to be stranded in downtown till 3:30 or four o’clock. I have a scheduled lined up,” Zelj¬kovic said. “My customers know they can call me anytime. That’s very important. I say 15 minutes, it’s gonna be 15. All of my business is coming off my phone, from taxi Wilmington Internet searches.”

Zeljkovic works the phone and dispatches drivers as calls come in. Word of mouth has paid off for him and having a unique name helps too. (Dragan is a common name in Croatia, meaning cute or sweet.)

A day off is rare, as is one when his phone doesn’t ring. Zeljkovic also does for-hire driving to out-of-town airports. If he doesn’t have a limousine booking, he works a taxi vehicle.

“I don’t want to have a van, not my style,” he said. “I have sedan car. I have an SUV with a taxi meter and permit. I have a sedan that I keep with taxi meter so you have an upscale vehicle for affordable taxi rate.”

Being dependable has helped the business. Zelj¬kovic keeps regular contacts in a phone book and when a customer he knows gets stranded or drunk, he knows where to take them. If he’s busy he’ll call another taxi service and give them the work.

“I train my drivers for a month before I let them drive, from opening the door for the customer to loading luggage,” Zeljkovic said. “First place is your service. If you put that first, money will come.”

Anderson said he isn’t surprised by Zeljkovic’s success, and believes the taxi business has provided direction for him.

“He planned for a long, long time. He always has to do things Dragan style and realized really quickly the taxi business would let him, as long as he was in charge,” Anderson said.

Zeljkovic said Wilmington reminds him of home in many respects. He’s very connected to the water and has found a fishing partner in Marino Ranj, owner of Mr. Taxi. Ranj is from New Jersey but came to America from Croatia at age 3.

“What are the odds of that, both from Croatia, in the same business,” Zeljkovic said with a laugh.

He hasn’t returned to Croatia, though he hopes to. His mother is still in Sydney, Australia, and has visited the U.S., albeit unhappily due to American airport security.

“First time I pick her up she come out mad,” said Zeljkovic, who then began mimicking his mother. “?‘These people treat me like criminal. When you come to Sydney they smile, say, welcome to Sydney.’ I tell her, ‘Sydney didn’t have 9/11. You need to understand. These people had 9/11.’ ”

His understanding reveals an empathy toward others, but even his mother’s frustration over airport security speaks to how Zeljkovic was raised. While some say to treat others as you want to be treated, Zeljkovic said he was taught to treat everybody better than he wants to be treated.

“Take that little step extra,” he said. “I’m not going to help you for you to give me (something) back. I help you because it makes me feel good. I want you to help someone like I help you. Pay it forward. If you do that way, place will be much better.”